1. I had been an avid follower of VMWARE until recently wherein I have shifted my loyalties to VIRTUAL BOX....simple,easy....and the best part is that it is OPENSOURCE.One problem that I often used to face was that when I copied a VDI file from one place to another...it used to give me a message as shown in the screen shot below that said something like " Failed to open the hardddisk F:\....\.....vdi.So I used to keep trying ways and means but that remained unsolved.But there is a single command line solution to this that goes like this...(also shown in the screen shot).Goto the command prompt first as administrator. 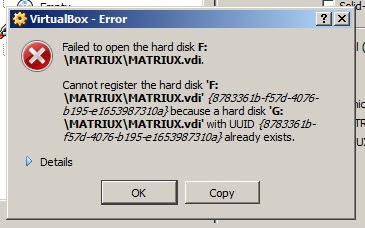 and this should give a message similar to this